RPG fan? Good, story-driven? awesome. Like a bit of sci-fi? Also good. Don’t mind a bit of post-apocalypticness? Great! Dark Crystal Games may just have the game for you. Taking place in the games open world known as “The Dome” which is a mysterious structure discovered in a remote desert, players will need to rely on their skills of exploration and tactics in traditional turn based combat in order to overcome the mysterious nature within the world of Encased. Create your own unique looking character, choose to work under one of five factions known as “wings” and journey into this narrative-based RPG as you attempt to help save all humanity as it struggles under the Dome.

Hitting early access in 2019, Encased will allow players a whole lot of creative freedom with decision making which will determine how the story’s plot unfolds. This dynamic approach to telling a story within a video game will not only encourage players to think carefully about their in-game decisions, but it also adds a lot of replay value on top of this 25-30 hour campaign. At it’s core, Encased is an isometric old school RPG with traditional turn based combat but once you get to grips with how the game sets itself apart from others in its genre, you will soon realize that it has so much more going on than what first meets the eye. The game draws it’s inspiration from other RPG’s within the same graphical style from the late 90’s/early 00’s like the original Fallout but aims to be much more than a game existing only to feed our nostalgic needs.

After creating your own character and picking a faction (Wing), the game starts you off just outside the Dome where you will learn a few basic training tips. After that, it’s off to the spire for you, which is located above the only aperture of the Dome where you will descend into the Dome from. Without spoiling too much of the story, it is after you complete your first few missions inside the Dome where you discover the main hook of Encased’s plot. Beneath the desert, you stumble across a dangerous anomaly that awakens a telepathic entity known as “Maelstrom”, which was created by the forefathers – the beings who created the Dome itself! All communication with the world outside the Dome is lost as the Maelstrom sweeps through the Dome infecting the minds it comes into contact with. You and your group fall into a technology induced sleep for five years and after you awaken, the whole world has changed and the five Wings have turned into five warring factions.

The fascination of the Dome to the characters is the fact that the Dome holds a lot of power in the bounty that is extracted from it. But since the devastation of the unearthing of the Maelstrom, the Dome is under threat of becoming a desperate warzone for the five Wings. Speaking of which, each Wing grants players different bonuses although you are never tied to a class, Encased gives players the freedom to distribute their own skill points, choose their own abilities and develop their own characters how they see fit. Each Wing is differentiated by colour: Black, White, Blue, Silver and Orange, each having their own benefits and interesting options. Maelstrom is regarded as the biggest threat to the Dome but since you control the character who freed the entity, you now have a special relationship with it and will often have to interact with it which may even lead to it granting you wishes. Such things will usually come at a price so be careful. You must find a way to get to the heart of the Dome to find all the answers about this Maelstrom but the closer you get, the more powerful it is and will try its negative effect powers on you which you must resist. Players can develop the stat “Psyche” which influences your interactions with Maelstrom which is vital for venturing further towards the heart of the Dome. 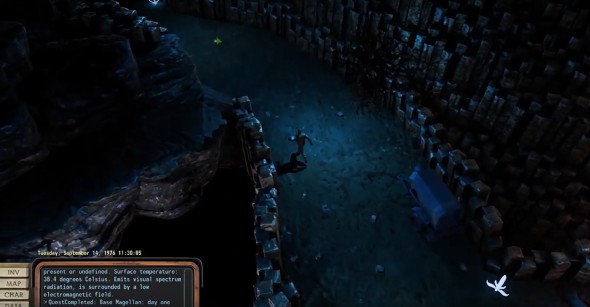 Above the surface, the Dome is merely the cap of what the forefathers created, it’s what lies beneath the sands is where mysteries of this world are kept. The world within the Dome is massive, boasting over 170 sectors the world map contains bunkers, swamps, caves, complexes and other hidden places to explore complete with its own day and night cycle. You are going to want to get to grips with the strategic elements on display with the combat as quick as you can as you will encounter lots of dangerous creatures and traps on the way to the heart of the Dome. The combat system adopts a tried and tested old school turn based grid system style where you control only your main character but will manage the behaviour and tactics of your other party members. As simplistic as it sounds, players will find depth in the combat system by utilizing their action points while factoring in the cover system, special abilities, resistance and damage types into each battle. Weapons play a big part in your battles too, there are dozens to find in the world, a lot of which can be upgraded too.

Random encounters with enemies were quite the standard when it came to old school RPG’s of this kind back in the later 90’s and they make a return in Encased. But the difference here is that it’s not just a case of being attacked by a random encounter of creatures. Instead, each encounter in Encased will tell its own post-apocalyptic story! This nugget of developments has piqued my interest personally and I look forward to seeing how it looks. Other features of the game worth mentioning include a “Justice System” where players can face punishments such as fines, imprisonment or even execution if they decide to commit offences. Your reputation will be rebranded to “Petty Thief” or “Enemy of the State” or worse depending on the crime. The game will offer you ways out of your arrest like bribing the judges or organizing a jailbreak so you will never be short of options.

Of course, we cannot wrap it up without touching on the narrative approach Encased has taken. If you have seen the gameplay trailer then you will notice how the story is told not by cutscenes but by pictures and text, kind of like how old text based games’ stories are told. Lets not forget that Fallout and other old school RPG’s are not the only inspirations of Encased, the sci-fi novel Roadside Picnic also played a big part in that department for the team at Dark Crystal Games. It’s this kind of multiple choice answer system within the story telling of the game where players will make the most of their in game decisions which can in turn affect the environment around you and change the development of the plot. I hope to see a lot more of this decision making approach to the game where each decision I make has a REAL impact on how the game develops so that it gives me a real sense of individuality. I will be following the developers closely on their main site for more details as well as their Kickstarter page for stretch goal updates. Encased is only 9 days away from finishing its funding period on Kickstarter and is just under $5,000 away from achieving it’s initial goal which I am sure it will reach within the next day or two.

As stated before, Encased will be hitting early access in 2019 which will be exclusive to Steam on PC, Mac and Linux. The final version of the game will be released during 2019 with the console versions (PlayStation 4, Xbox 1 and Nintendo Switch) planned for winter 2020. All that is left for now is to enjoy a gameplay trailer below and don’t forget to follow me on Twitter for more Indie magic and leave a comment below with your thoughts on Encased. Thanks for reading!