The games that are able to pull off multiple genres successfully are usually games that become favoured by cult fanbases. To name a few: Act Raiser, Dark Cloud 2 (Known as Dark Chronicle here in the UK) and Star Fox Adventures! Very rare is it that we will get an Indie title that embraces the challenge of boasting multiple genres within a game due to the constraints, manpower and small amount of funds that smaller independent developers have to work with. A.N.N.E is a game that is not only attempting to push gameplay boundaries but is also very pleasing on the eye and if the early access demo is anything to go by, the full game is set to appease backers of this project very much indeed. It is a shame that fans and backers alike have had to wait 6 long years to get their hands on this early access build since the completion of A.N.N.E’s successful kickstarter campaign back in 2013, here’s hoping we won’t have to wait another 6 years to see the full game released. 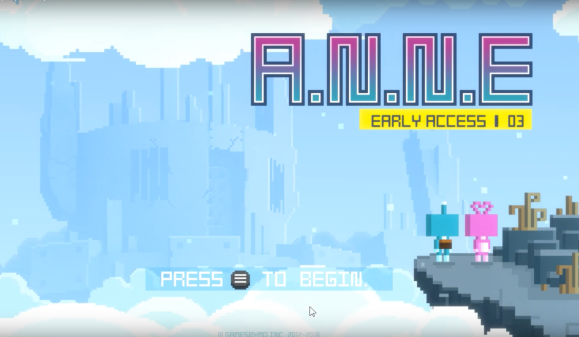 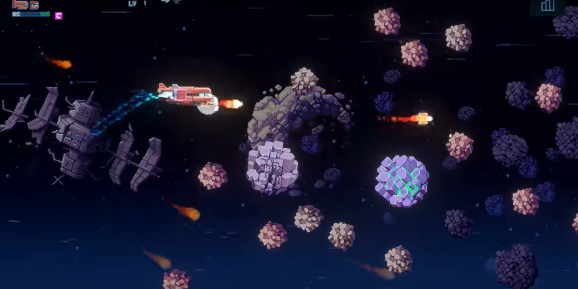 So when I say multiple genres, what I mean is that A.N.N.E plays in two different ways, the demo started me off flying around in the protagonists ship (you get to choose at the title screen which character you play as, either the boy or girl robot) from left to right blasting your way through meteorites in the form of a shmup game. Using an Xbox 1 controller I was pressing RT to shoot, LB allowed me to do a 180 and start shooting objects to the left of me and the A button set off my “shockwave” ability allowing me to push bigger meteors that were indestructible out of the way. I would highly recommend using a controller of sorts as the game handled this section very well although I am unsure as to what other controllers are supported other than Xbox 360/Xbox 1 controllers. When you get to the end of this section you will be landing your ship at the entrance to a huge ship which will have you platforming through in order to try and rescue the captured “A.N.N.E” who is about to be destroyed for reasons I will not spoil. These two sections play out as the prologue before you start the main game and give you a brief introduction to the two types of ways you will be playing, needless to say, platforming also handles very well on an Xbox 1 controller.

together and for the most part, the game plays out like a Metroidvania where you will have to do a lot of backtracking after gaining a new ability in order to progress further in the game. Abilities and upgrades show a lot of promise in A.N.N.E due to the fact that not only can you upgrade your weaponry and abilities while platforming, you can also do the same for your ship as well. While I was only able to find two different weapons for the platforming part, a normal blaster and a gun that spreads in 3 directions, it was an insight into the potential the full game will have to offer on that front. The only ability I found in the demo was the dash ability which would make you run faster by holding down the RT button and would also give you the opportunity to jump further. Obviously this was a very important ability as it meant now you could get to areas that required a longer jump that you couldn’t quite make before. I would love to see a dodge roll ability in the full game allowing you to roll out of harms way if you get swarmed by enemies. 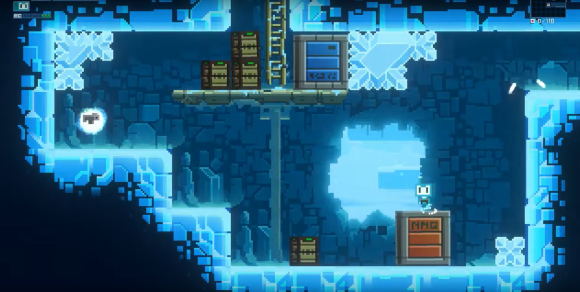 It’s no secret that I don’t consider myself to be very good at Metroidvanias (or video games in general) so one feature that I found very useful were the small arrows pointing you in the right direction towards quest targets. A lot of backtracking is involved in A.N.N.E and this small feature was very welcoming, for the hardcore audience out there, you can toggle these quest arrows on or off by pressing the SELECT button on the controller. As well as trying to collect all the parts of “A.N.N.E” in order to rebuild her, you will also need to be collecting generators in order to power up your ship which are scattered throughout the platforming areas. One of the generators I managed to obtain by defeating a boss which although wasn’t that difficult, it was nice to see that the game will indeed contain bosses which will no doubt require a lot more skill to defeat the further you progress. A small and largely harmless bug I came across in the demo was that after I died at the boss, the bosses music was still playing once I had respawned elsewhere which I’m pretty sure it is only supposed to play in the boss room whilst you are fighting it. One other annoyance of the demo was that enemies were able to shoot me even though they were off screen and I had no idea they were there as I had not been to that screen before. Two minor bugs then, hopefully these can be ironed out in time for the full release.

Once you have enough generators, you can power up your ship, I wasn’t able to do much in the way of purchasing upgrades for the ship apart from when I repaired it but once it was repaired it opened up my favourite part of the demo. You will be able to fly around the platforming sections in your ship and use your ship in order to move any heavy boulders and uncover secret areas which you will be able to land again and continue platforming. This is easily my favourite aspect of the game giving you a real sense of exploration and discovery, I really cannot wait to be able to do a lot more of this! I am very glad that A.N.N.E was not cancelled as I am sure backers may have got the impression it could have been after having waited so long since the successful Kickstarter campaign. It really does offer a unique and exciting style of gameplay with excellent visuals and sound, developers Gamesbymo Inc are onto a real winner here as long as they can harness the magic contained within the demo which I highly recommend you all try. The only platform I am aware of that A.N.N.E will be released on thus far is Steam but I am sure it will make it to consoles dependant on its success. 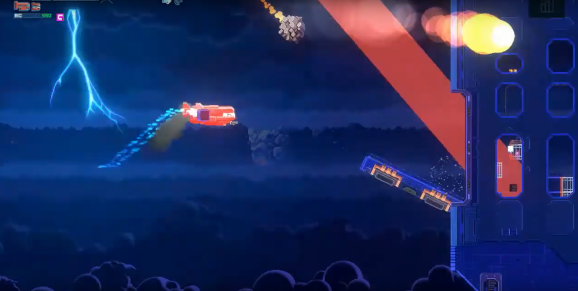 I would love to hear what you think about A.N.N.E, tried the demo? What are your thoughts? What are your hopes and dreams of the full release? Let me know in the comments below! Thanks for reading!

1 thought on “Has the early access of A.N.N.E been worth the 6 year wait?”